Designers and developers speak different languages, have different needs, yet we are still working towards the same goal. Through my time at Unboxed, I have been working on making the transition of features smoother from design to development. This article includes various activities that we have trialed over the course of one project to ensure that there is clear communication and a successful collaboration.

After user research synthesis had taken place, the designer and researcher would host a one hour session towards the end of the sprint for the whole team. The purpose was to share the outcomes of the research, and the direction of features. This was a way for me, as the designer, to ask questions about feasibility, while the developers could ask questions about the user flow, feedback, or upcoming changes.

_Sprint structure where the design debrief sits closer to the end of the sprint. _

Tips for ensuring the time is worthwhile:

Since, these sessions have been implemented in Discovery phase projects to have a more in depth session about user research findings with the product owner and core team. We find that this enables a more focused session, as the Show and Tell has a wider lens, yet cognitive overload can be a challenge. Within a Discovery Project, the research is often a lot broader and therefore harder to take in at once compared to a Beta where insights can be organised by the webpage tested. Prioritising and organising the insights into categories or steps within a journey can be easier for people to digest. When presenting, first explaining what will be covered and the format, and then taking people through it slowly is beneficial. 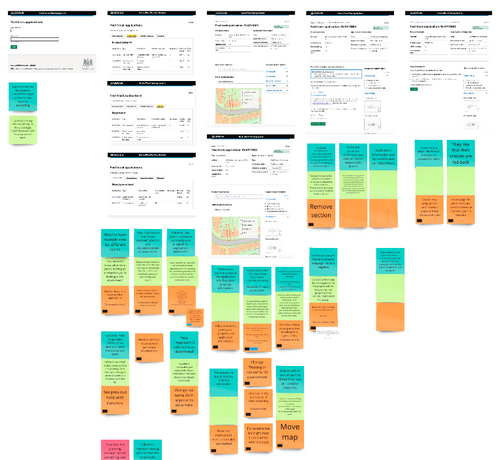 Digital synthesis of user insights, quotes and action for each screenshot

Often when creating digital products, design and user research are a step ahead of development. This ensures that features are validated before they are built. Early within this project, a prototype was made for testing; however it was a lot more experimental and detailed than the skeleton journey that the developers needed to code. Therefore, the features for coding were very basic and did not match the prototype. This created a lot of confusion about what was required, especially as seeing more functionality on the prototype was exciting.

Therefore, to make it easier and ease communication, I created two prototypes. One was for testing with users (which had more content and more functionality to test), while the other prototype had a rough skeleton. Using the GOV.UK prototype, this process was relatively fast. 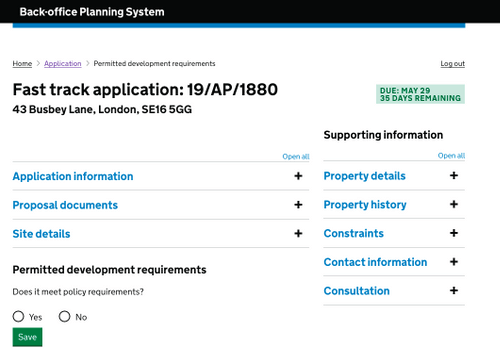 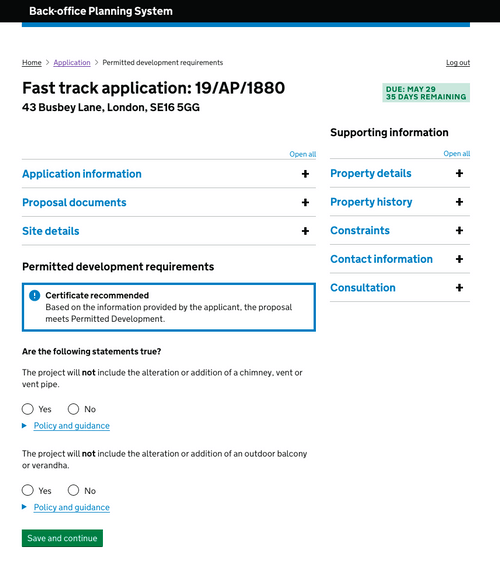 Tips in creating prototypes for developers: 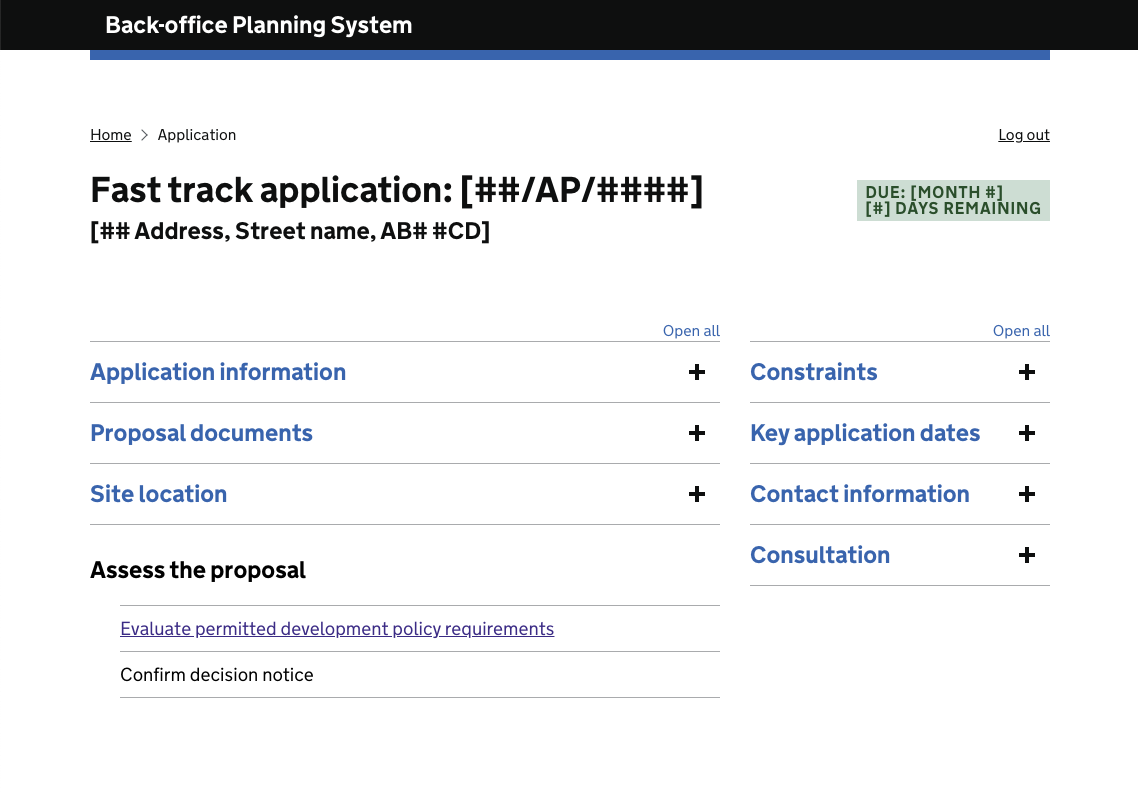 Using the GOV.UK prototype kit has additional benefits because developers can take the layout and CSS easily. There are less unknowns than when developing a clickable prototype.

*Having a designer-who-codes on the team who has a holistic understanding of everything from user needs to technical challenges is like having a superpower ;-) Your GDS knowledge saved us a heap of time because we were able to take a lot directly from the prototype *

Although generating these prototypes was relatively fast, keeping two prototypes up to date was a challenge. Another possibility which may have been easier could have been starting out with wireframes, as outlined here:

In retrospect, I wonder if there is a supplementary, more lightweight prototyping approach that can be used to communicate flows between pages. Maybe wire-framing? We had some "skeleton" stories at the start of the project, which might benefit from this.

User stories are used to create tickets that developers will achieve within a sprint. Writing user stories ensures that what is built relates to user needs. One challenge that the research and product team had to overcome was what was collectively seen as important to include in these stories, as the teams often have quite different views. For example, developers often need to know quite minute details on how the application should behave if the user inputs incorrect data or does something unexpected. This is often not included within the prototype as it is not a part of the main user flow, but it is important to capture unhappy paths to solve these problems now, rather than redeveloping it later. To ensure the right information was included, we created a user story template, and began co-writing them prior to planning.

The template we used included: 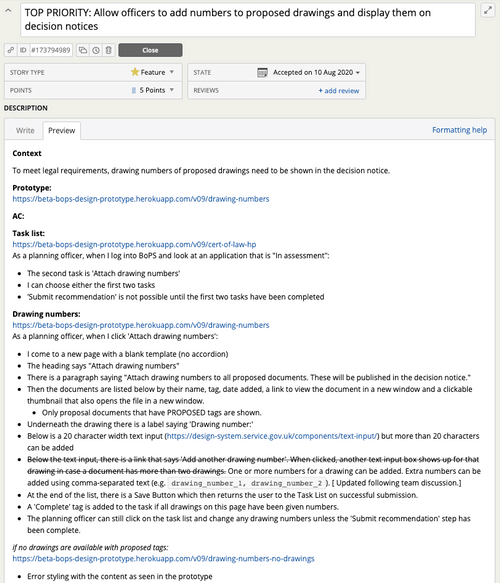 User story example showing the template in use

Working with the technical architect to write these stories, enabled me to understand their needs and what details were important to them. After a few sessions, I then started writing them independently and then getting feedback on them to save some time. From the beginning of the process to end, my stories changed drastically as I started to understand what details were important to developers. For example, instead of including heavy details about what styles and typography to use, I focused more on the functionality. This is especially true when using coded prototypes, versus image-based, or clickable prototypes. Developers can easily tell what the font size should be based on the HTML and CSS used; however, it is harder to create a single coded prototype that includes all the possible outcomes of user error or actions.

I agree and I really enjoyed writing stories and practicing this together. For me the most important part of A/C writing is working out what the new inputs and outputs are. Things like static copy, finer points of layouts and of course things like fonts etc can be left in the prototype.

Normally with remote user research sessions, we would have three people join the session: the researcher, the designer and the participant. Keeping attendee numbers low helps the participant to speak freely and not feel intimidated.

For a few weeks we needed to have another notetaker and the developers joined in by coming to individual sessions. It was a really wonderful way for them to understand the user struggles and the reason for why features were changing. Everyone came out of the sessions really enthused. The types of notes developers took were also really detailed and gave a slightly different angle than those taken by other team members which added a lot of value to the research.

Their enthusiasm also showed that although the design debrief goes through the same findings, it is not as compelling or effective as hearing the user and their voice. There could be an opportunity to play back video or audio segments from the research during design debriefs to increase empathy for the user throughout the whole team and make these sessions more effective.

The only slight complication is that if anyone joins a single session in a round of user research, that feedback feels more relatable and therefore higher priority to that individual. It is then up to the researcher to ensure that one participant's feedback does not outweigh others. This doesn't mean that one person shouldn't join a single session, but is something to be aware of.

Overall independent all these processes, the developers' feedback overwhelmingly suggested that the most important features of a successful collaborative relationship was:

The one thing that we identified as a need for improvement within our processes was ensuring that the design prototype was as simple as could be for the MVP while meeting user needs. The current format of the design debrief did not allow enough time to achieve this, moreover there would be too much cognitive overload to think about the user feedback and prototype simplification. Our team was also built of naturally divergent thinkers, so ensuring that we narrowed our scope is crucial.

Often we would refine the prototype based on changes, create user stories, and then bring these stories into planning. During planning, someone would then have an idea of how to make the prototype simpler, but this should be done prior to that session as a lot of time would then be wasted creating the prototype and stories. Another problem was that if someone missed the design debrief, they may not understand why certain decisions were made and this would require a lot more conversation.

Feedback from developers on how to better evaluate the MVP:

Maybe it could be useful to have a set part of the design debrief where we look ahead at upcoming designs and see if they impact stories we are working on. A quick whip-through the existing stories to see if there are bits that may be cancelled out by future user stories could be a good thing to integrate if there's time?

I wonder if we could try posting videos of designs / flows in Slack, and then encouraging people to supply input in the thread if they have ideas to help simplify things. I wonder if that type of communication would produce more discussion, especially when remote and people are on multiple projects.

Therefore, some changes could be:

If successful, by implementing another way to evaluate the prototype, the process of going from design to story writing, to planning and then to development would be smoother. Less time would be wasted re-doing steps when a feature is simplified.

In the next project phase, I hope we can better improve our processes for evaluating the MVP and ensuring it is in its simplest form before reaching development.