The ‘EU Referendum Rules triggering a 2nd EU Referendum’ petition has now received 3,900,000 signatures from members of the public on the government Petitions site, breaking the previous record of 823,346, to become the most popular Parliament petition ever.

Following the EU referendum result, this petition was started by a ‘Leave’ campaigner who anticipated a ‘Remain’ result but later adopted by ‘Remain’ voters, and received over 2.5 million signatures over the weekend. It has now crossed the 3.9 million mark, with more signatures being added all the time.

A statement has been released by the Petitions Committee regarding the concern of invalid signatures in the system:

That’s the story - but what about the technology behind this unprecedented petition signing?

The Rails app behind https://t.co/bVfm2AEzkh is now running at 45k rpm and 62k concurrent users - over 2k sigs per minute. 😨

Helen Jones MP, The Chair of the House of Commons Procedure Committee, has confirmed the Petitions Committee will consider the petition at its meeting next week and decide whether to schedule a debate on it.

Using the signature data to better understand geographical trends Petition Map, a visual heat map showing the number of signatures per each constituency, hit a record number of 1,632,760 sessions across the 48 hours following the referendum result.

The interactive heat map was shared in The Independent, Mail Online and Mashable as part of their commentary on this story. 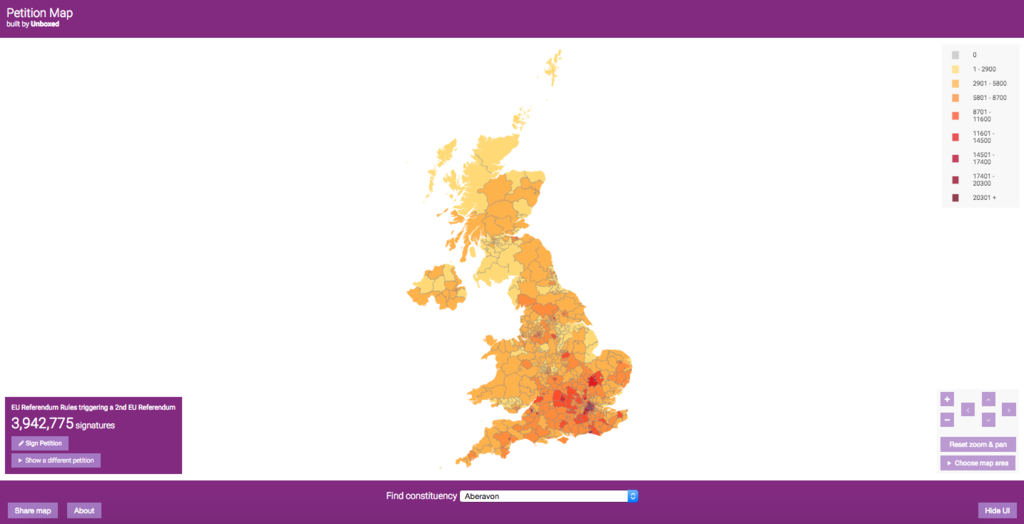 Any petition signature data can be viewed geographically in the same way. The last time a heat map of a petition was shared widely was Block Donald J Trump from UK entry.