The Parliament Petitions platform has hit a milestone number of debates since its relaunch last July.

Over 25 petitions have crossed the 100,000 signature threshold to be considered for debated in the House of Commons, totalling over 5,300,000 individual signatures, with a further five petitions awaiting debate.

Examples of high-profile petitions to have passed the debate threshold include: ‘Block Donald J Trump from UK entry’, ‘Introduce a tax on sugary drinks in the UK to improve our children’s health’, ‘Give the Meningitis B vaccine to ALL children, not just newborn babies’ and the more recent: ‘STOP CAMERON spending British taxpayers’ money on Pro-EU Referendum leaflets’.

If a petition reaches 10,000 signatures, the Government will offer a formal response, and if it reaches more than 100,000 signatures, it will be considered by the Petitions select committee for debate in the House of Commons.

Alongside these debated petitions are a further 210 to have received a Government response, having each individually reached 10,000 signatures, and a total of 10,070 petitions created in the 10 months since the launch.

Read about how we collaborated with Government Digital Service (GDS) last year to relaunch Petitions platform for UK citizens. 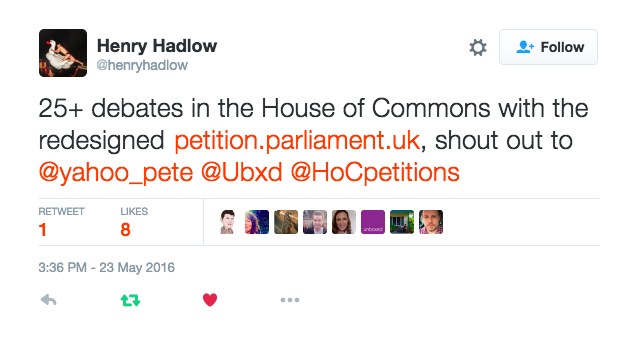