I have been to a number of university careers fairs - as both a job seeker and an employer - and know how awkward those conversations with somebody that you do not know, who almost definitely intimidates you, can be. As a jobseeker you hope that you are good enough to do the job and, as an employer, you hope that your company is attractive enough to appeal to the “real” talent. Such fairs are in high demand and there are usually hordes of people fighting it out for the same thing.

Jobseekers may be sacrifice an afternoon of gaming, surfing the net or drinking and sometimes there are actually tests that they should be studying for. The opportunity cost of a day off a client site plus the registration fee for the event plus a potential prizeless venture all add up for the employer. And even worse is if the event is attended by the wrong crowd and you find yourself explaining what you do to people who have no idea that what you do even existed, let alone how to do it themselves. Experiences like this in the past have led to much rage talk in the pub.

And I am old now, I know. I am terrified of talking to kids, who know more about tech than I do, about coming to work at our tech company. These are the kids who will define the way that I will engage with my grandchildren; they have grown up with touchscreen technology and Skype, which my parents still struggle to use.

Over dinner the night before the event I applied some lean thinking to how our stand could be set up to reduce the waste of unnecessary awkwardness. Lucky for me, I work with developers who have taught me their preference for Test Driven Development (TDD) as a means of driving valuable solutions. And, as they are the sort of people I hope to attract to our stand, it made sense to “write” some tests to ensure that I was only talking to the right people. 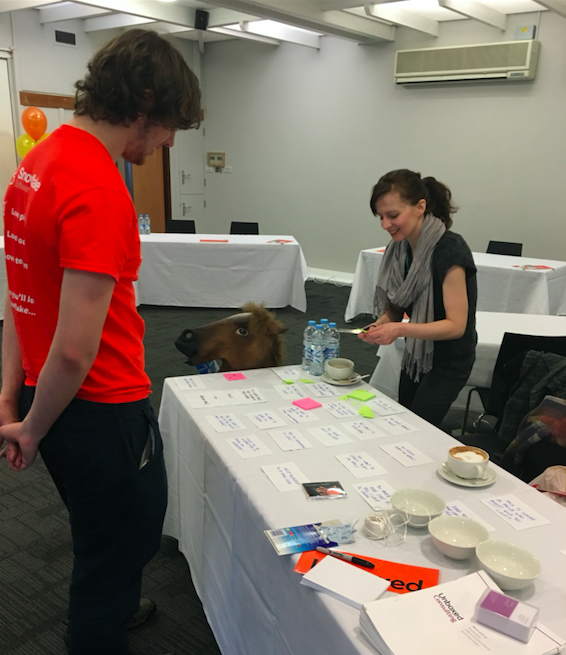 Writing a test case that defined the desired candidate
On arrival at the fair an ideal candidate escorted us to our stand: great communicator, helpful, funny, CompSci student in his second year. This was my opportunity to validate that my approach would select the right sort of candidate. 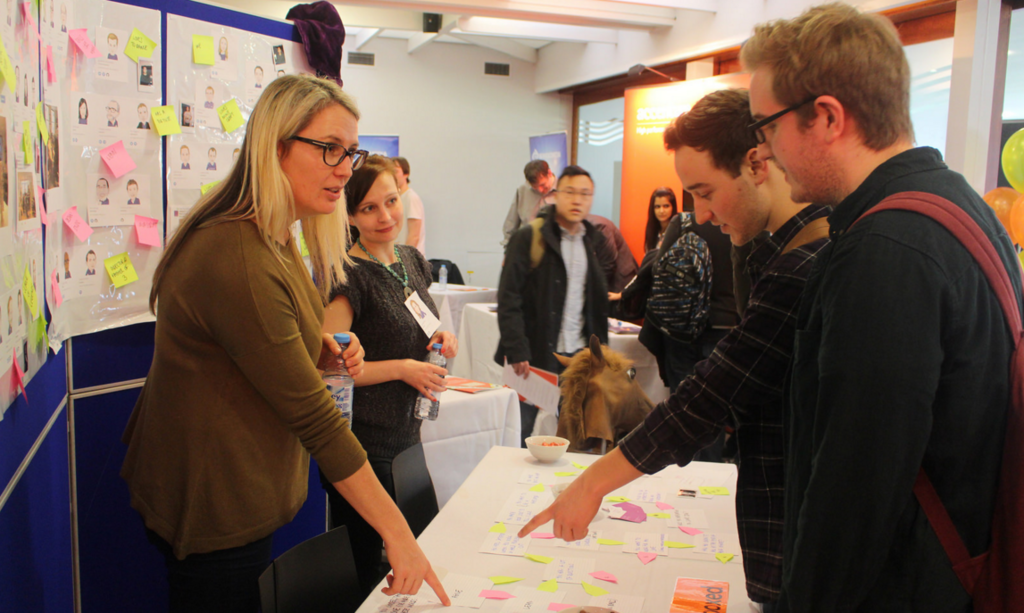 Producing the minimum viable solution to pass that test
In a mock tech test situation, I asked the trial user to lay out my test, setting the happy path in the decision tree. This would drive the design of interaction with delegates at the fair and ensure that candidates that appeared at our stand was matched against at least one suitability criteria.

Refactoring
I wanted candidates to be able to identify with the apparent madness in my method so I updated the process to reflect requirement for a sense of humour. By running a couple of candidates through it we found that unsuitable candidates were eliminated early in the process. 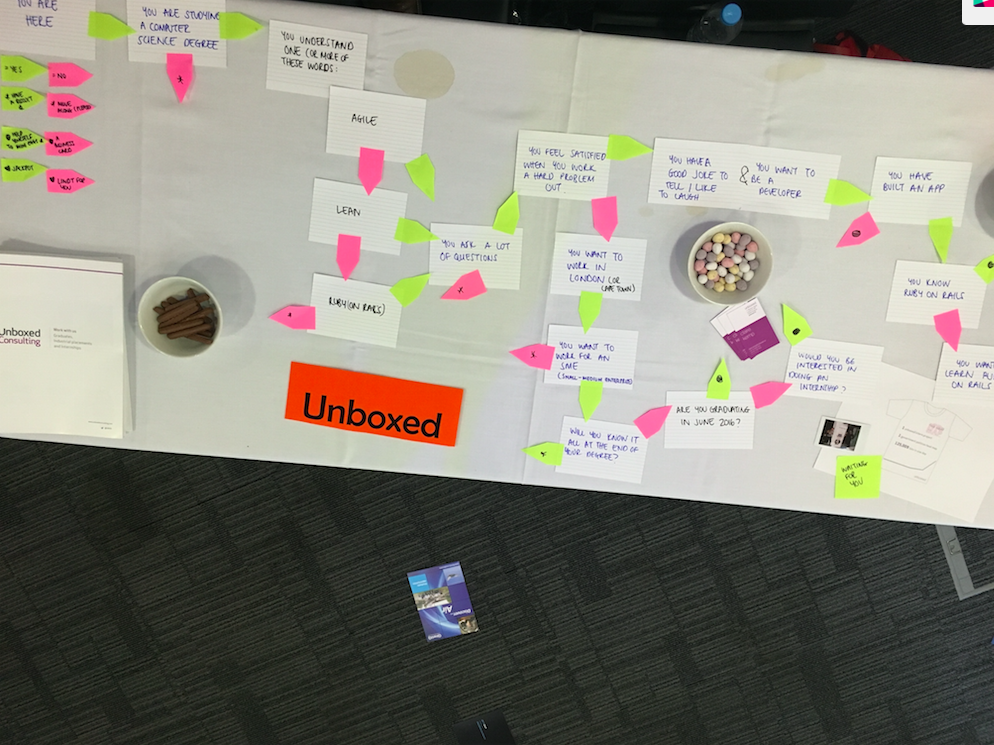 I did not want to seem rude or cruel, and I respect the knowledge these people possess, so we added a chocolate prize for everybody as if to say “Well done for being clever!”. We also added a gaming incentive in the form of rewarding better quality chocolate the further along the decision tree each candidate got.

In the past we have returned from such fairs with paper CVs of candidates that are not vaguely interested in working with us or candidates who are studying something that might align with what we do but in a role for which there is limited demand. This usually requires lengthy and tedious remedy later in the recruitment process.

Using the test driven candidate self selection has inspired a greater level of confidence that the 50 emails that we gathered from recruitment fairs this year will result in a larger pool from which graduates and interns can be chosen.

We know that internships are like summer camps for high-achieving insomniacs - it is usually the eager ones that are working during their summer holidays whilst the lazy ones sleep. And when those interns graduate there is a high likelihood that they will return to us, their learning curve is much steeper meaning that their time to competence is reduced.

Savings from onboarding coupled with the savings resulting from implementing test driven candidate self selection are greater than the shame and awkwardness I feel in those conversations with students that I do not know, who are just trying to impress me as a potential new employer. 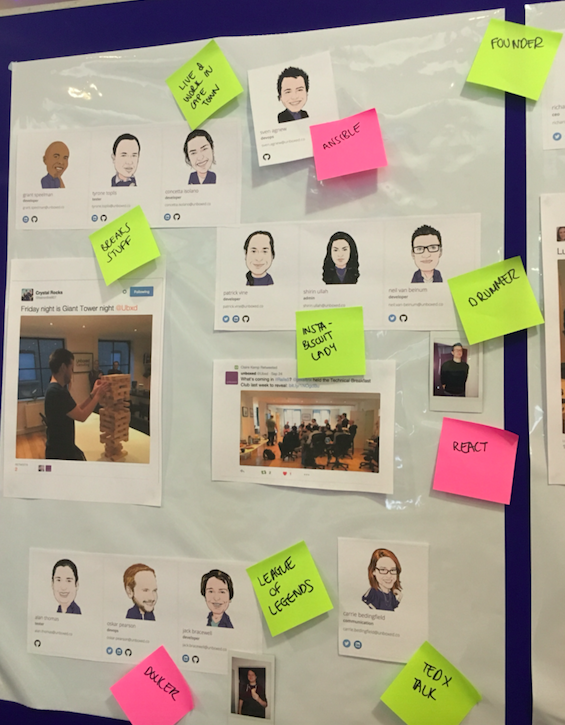