How dot voting can reveal the unexpected

While facilitating a stakeholder workshop recently, I ran two rounds of grouping and ordering. One I used dot voting, one didn’t. On reflection I was surprised with the results.

The question asked during these processes following a pattern of, what are your top three things you do/don’t like about a tool. The stakeholders wrote their three things on post-it notes, which where then collected and read out in random order, and the stakeholders agreed on their grouping.

In the first round, we had three largely populated groups, and several smaller ones. Therefore we didn’t dot vote, as it was felt by the group, with me admittedly leading them, that these three groups represented the most important for the group overall. 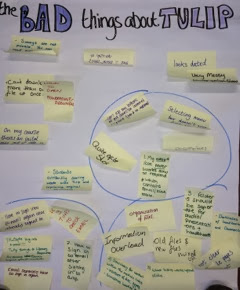 On the second round, there were not any clear winners, by number of post-its, so we dot voted. The surprise came, that one of the top three items was a “group” of a single post it note. Everyone was happy with the outcome and we moved on. This single post-it note from a single person, turned out to be very important to people, but it didn’t come out when they were thinking up their three items. 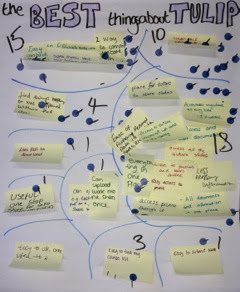 My insight here is that dot voting should always be used when running this and similar activities, as the top items might not necessarily be the item that came up the most.

Try it yourself and let me know if you also see smaller groups getting voted up.